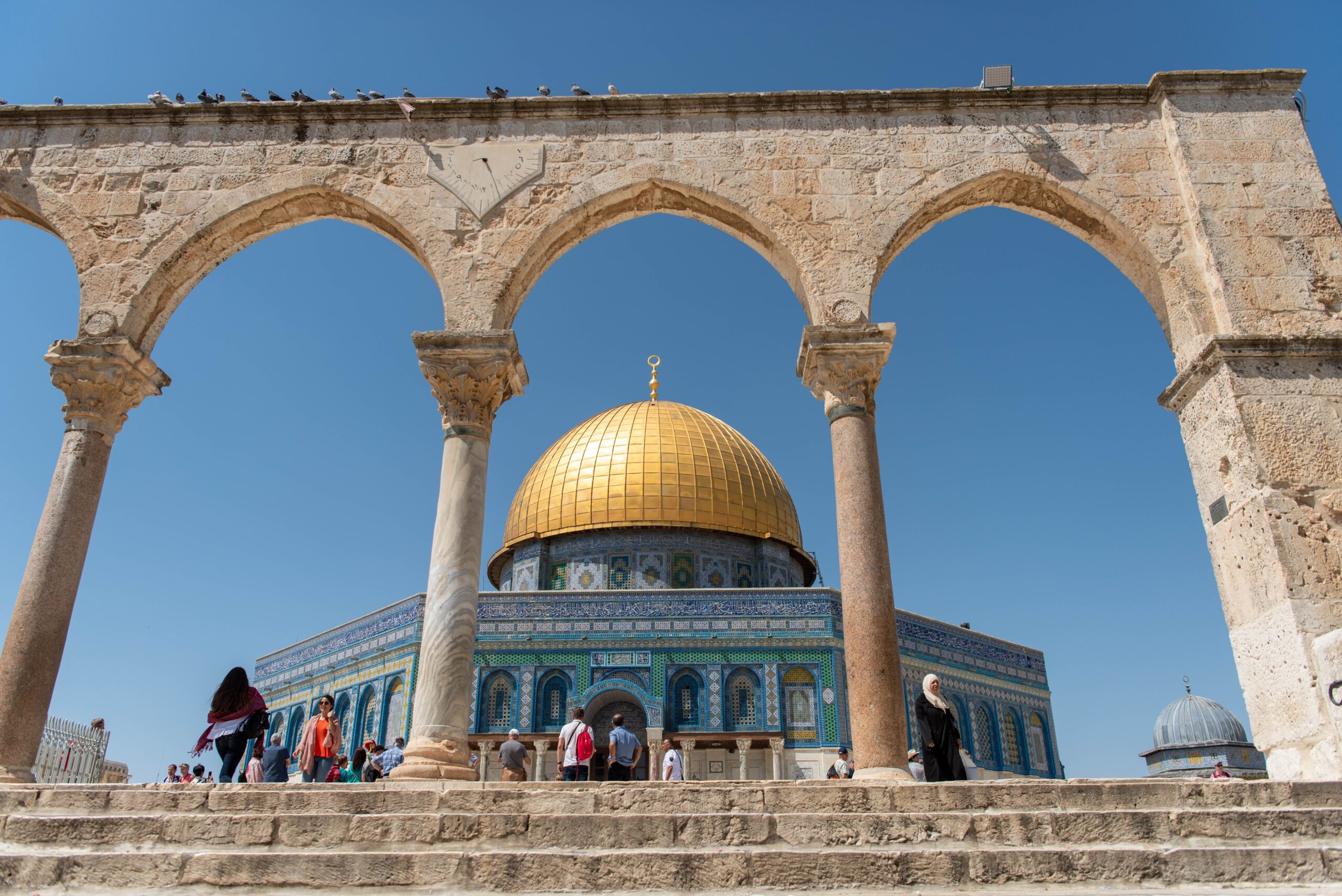 Dome of the Rock – Jerusalem : Photo by Daniel Klein from Unsplash

It’s a regional conflict between Jews and Arabs for the same territory.

During WW1, in 1917, the British tried to weaken the Ottoman empire by supporting Arab rebellion and promising them independence in the liberated territories.

Finally, the Ottoman Empire was defeated and got split into new land by the European powers. What remained was Palestine. The British wanted to create a jews homeland here but jews community was a small minority then.

During WW2, when Jews were persecuted by the holocaust, they immigrated to Palestine from Europe, especially Germany where the anti-semantic Nazi party came into power.  They increased their number as well as the tensions with Arabs too.

Due to the overwhelming situation, in 1948, Britain withdrew from Palestine that resulted in the United Nations taking over. United Nations proposed to divide the region into two states – Arab State and Jewish State and Jerusalem with the special status of an international zone. Most of the Palestine Jews accepted the partition but the proposal was rejected by Palestine Arabs. Then what followed was a Civil War between the two communities.

The Arab league puts together a liberation army of volunteers to fight. On the other hand, the jews organized an army by giving military training to its population.

In 1948, jews proclaimed the independence of the state of Israel. In response, the Arab League declared a war. Finally, the Armistice was signed. As a result, Israel seized new territory that included Western Jerusalem. Egypt received the Gaza strip, and the West Bank was annexed to form Jordan.

This conflict caused a large scale displacement. Many Arabs fled Israel territories to refugee camps. On the other, Jews communities in Arab countries took refuge in Israel or elsewhere in Europe. Eventually, many European Jews who were reassured by the victory of Israel chose to settle here.

In 1967, following tensions with its neighbors, Israel declared war on Egypt, Jordan, and Syria.

In 1973, Egypt and Syria attacked Israel to get back their land. Initially, the Israeli army fails to repel the attack. Under the influence of the Cold War, the Soviet Union and the Arab countries gave support to the attack while the United States sends emergency supplies of weaponry to Israel. With this boost, the Israel army further continues to push its borders.

After a cease-fire, oil-exporting Arab countries decide to punish the United States and Israel allies by increasing the price of oil and decreasing its production. It caused the first oil crisis in 1973. As a result, Israel came under international pressure, ceded Senai back to Egypt and part of Golan to Syria but retains control over Palestine territories where colonization accelerates mainly in east Jerusalem.

In West Bank, tension increased over water supplies as Israel had the upper hand on the resources that were unevenly distributed between Israeli settlements and Palestine areas. In 1987, the Palestinian population rebels. It was the beginning of the first Intifada – an Arab term meaning uprising. In this context arises Hamas – a Palestine Islamists movement fighting Israel. Meanwhile, in 1988 Jordan cedes to the PLO all the country’s territorial claims in the West Bank and Eastern Jerusalem.

In 1993, Palestine Liberation Organization (PLO) and the Israeli government agreed to implement a two-state solution by establishing two states – Palestine for Arab people and Israel for the Jewish people.

In 1995, a partition plan was proposed that provided for Palestine controlled areas, mixed areas, and rest under Israeli control ( plan for West Bank and Gaza Strip). But the two parties were unable to agree on thorny issues such as the status of Jerusalem and the return of Palestine refugees.

Israel begins constructing a wall in the west bank to protect the country but, in doing so, encroaches upon Palestinian territories. The wall is declared illegal by the ICJ. To try to calm the situation, the Israeli government in 2005 decided to remove Jewish settlement from the Gaza strip but retains control over its borders.

In the years that follow, tension focus around the Gaza strip, mainly against Hamas that came into power.

Israel imposes a blockade on the west bank while Hamas regularly fires rockets into Israeli territories. Violence from both sides resulted in a humanitarian disaster.

Why is the solution so difficult to achieve?

Both sides consider Jerusalem as their capital, which is also a place of worship and has a cultural heritage. The Israeli settlements in the West Bank are making the division even more difficult. Thirdly, Palestinian refugees who left Israel believe that they deserve the right to be back.

Globally, countries have recognized Israel and maintain diplomatic relations. But at the same time country are sympathetic to the Palestinian issue too.

It is a long-standing struggle for sovereignty over some parts of the land. The conflict between Israel and the militants in Palestine has disturbed the peace raising ethical issues. Israel’s settlements and their encroaching upon the land claimed by Palestinians further results in human rights violations.

Moreover, the issue has other connotations because of the involvement of Arab countries and the western nations leading to volatility and insecurity.

Palestine and Israelis are firing at each other near Al-Aqsa in Jerusalem’s Old City. It all began due to clashes between Palestinians and Israeli security forces a month ago. It has turned violent resulting in rocket and airstrikes from the two sides.

Al-Aqsa Mosque, located in the Old City of Jerusalem, is the third holiest site in Islam after Mecca and Medina. But the site is equally holy for Jews, who refer to it as Temple Mount. Jews believe it was the location of biblical temples that Romans destroyed in 70 AD.

It is one of the disputed areas that have prevented a settlement between Israel and Palestine.

Israel considers Jerusalem as its capital. In the 1967 war, Israel captured east Jerusalem, which included the Old City, along with the West Bank and Gaza. Palestinians want these regions for their future state, with East Jerusalem serving as its future capital. But Israel’s annexation of the eastern part of the city is not recognized internationally.

WHAT HAS HAPPENED NOW? – Israel puts up blockades to prevent gathering at Al-Aqsa on April 12. It has been a popular gathering place for Palestinian Muslims during the month of Ramzan.

Later Israel imposed a limit of 10,000 people for a prayer gathering at the Al-Aqsa. Many Palestinians had headed to the mosque for prayers. They all were sent back. Violence has aggravated since then.

I really like reading an article that will make people think. Also, thank you for allowing me to comment!

I could not refrain from commenting. Perfectly written!

I enjoy what you guys are usually up too. This sort of clever work and coverage!
Keep up the good works guys I’ve incorporated you guys to my own blogroll.

Hi there, I found your site by the use of Google while
looking for a comparable subject, your web site got here up,
it appears to be like good. I’ve bookmarked it in my google bookmarks.

I’ll appreciate if you happen to continue this in future.
Lots of other folks shall be benefited from your writing.
Cheers!

I always spent my half an hour to read this blog’s articles everyday along with
a mug of coffee.

This is my first time pay a visit at here and i am genuinely pleassant to read
all at one place.

If you desire to improve your know-how simply keep
visiting this web site and be updated with the most recent news
posted here.