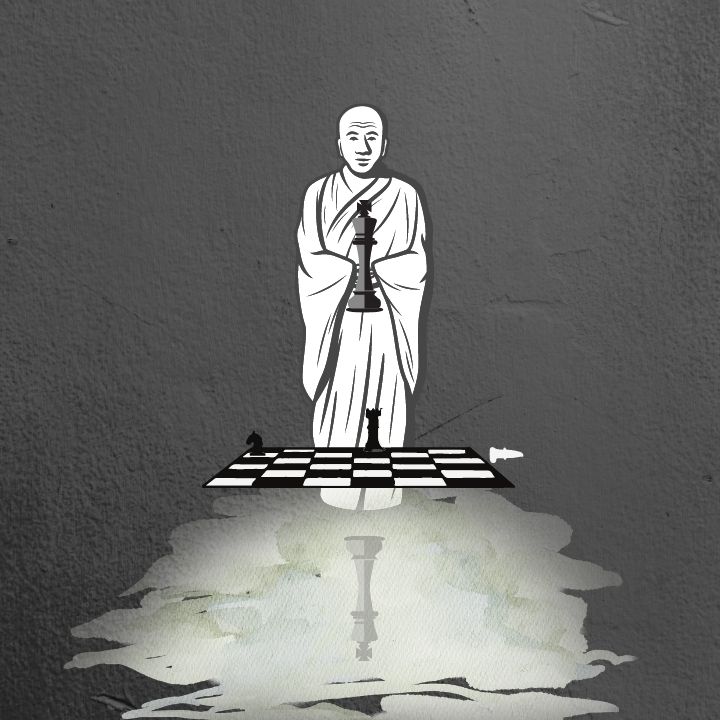 Chanakya was an Indian philosopher and royal advisor. He is also known as Kauṭilya or Vishnugupta. According to Kautilya inter-state relations are like a jungle where the strength of a lion prevails.

Kautilya belonged to 300 BC. Kautilya’s famous book “Arthshastra” contains his suggestion on statecraft and is one of the greatest works of political science. His book was discovered in 1904 and translated into English in 1915.

One of the important goals of the state was to acquire land as it was the main source of material well-being. Arthshastra primarily deals with the strategy of wars, foreign policy, and diplomacy.

There are many theories surrounding Kautilya’s ambition. According to the legend, he was insulted by the King of his time, Dhanananda of the Nanda dynasty, who ruled Magadha (in ancient India). To avenge his insult, Kautilya swore to bring down his empire and establish a new state.

Kautilya adopted a common boy Chandragupta Maurya and taught him strategies to become the future king. If legends are to be believed, all this took place in India, 2500 years ago.

Chandragupta is believed to be the first ruler to unify India under one administration with the help of his advisor Chanakya.

The Arthshastra is also considered as a training manual that helped  Chandragupta to end the Nanda dynasty and thereby starting the next Mauryan dynasty. The manual was passed down to his son Bindusara and his grandson Ashoka the Great.

There is another theory with respect to Kautilya’s childhood. He had canine-type teeth that his mother predicted would give him royalty. This prediction made his mother insecure. To allay her mother’s fear, Kautilya broke his teeth. He was known to be ugly because of that.

The primary objective of Chanakya was to provide and ensure the security of the state. It was justified by the times in which Kautilya is supposed to have lived and operated.

Politically, the Mauryan state had just come into existence and was yet to be fully established in the minds and hearts of the people. There were still many loyalists of the previous Nandas state who wanted to see the end of the nascent Mauryan State. Hence, Kautilya had to pay special attention to the safety and security of the state.

Socially, the then Mauryan society was a heterogeneous one and hence it had yet to find a cementing bond that will keep the societal differences to a bare minimum and help the administration to act effectively.

With regards to the structure of the State, Kautilya also chose to adopt a kingship model rather than any democratic form of government. It should also be remembered that Kautilya was operating in and around 326 BC when the monarchy was the preferred model of governance. Kautilya was respecting the context in which he operated, making the state all-powerful but acting in the interests of the people.

Kautilya’s work Arthashastra is written in a problem-solving manner. It does not take an idealistic and moralist approach. However, it does not mean that Arthashastra lacks any values or ethical dimension. Rather it only suggests that for state affairs, one might have to adopt Kautilya-neeti which means strategies in the interest of the state might have to be adopted by the king that is not strictly moralistic from the societal point of view.

However, somewhere it also makes us believe that the Kautilya state is an out and out military state. It is not true since Kautilya spoke about the welfare state and the importance of good governance.

In this theory, Kautilya has explained the different organs forming the state system.

King – It was a military state with powers concentrated in the emperor. King should have regularity of a clock, energy of a giant, and patience of a slave. Kautilya interestingly points that if the king does not perform his duties then it will lead to public anger and ultimately his removal. He cautioned the king against the display of any incompetence and lack of decision-making characteristics.

In the words of Kautilya, a single wheel cannot turn the chariot. Thus, the king must understand that for the efficient running of the system there is a role of other elements (e.g ministers, treasury, army, etc). King is the most important element.

Ministers – For the administration to proceed in the right direction, King has to take the advice and assistance of his ministers.

King should have at least three Amatyas (ministers). This is because two can conspire together against the king. Moreover, they are given separate responsibilities.

King is advised to keep on testing the commitment and honesty of Amatyas from time to time. Kautilya has given an elaborate method of system of spies. Kautilya permits the use of women as spies too. He gives explicit suggestions as to how the king can test Amatyas integrity.

Monetary payments in cash have been advised and go to an extent of even fixing the salaries for different officials. It was also done to ensure that ministers are properly remunerated so that they do not succumb to any temptations which might be offered to them.

Treasury – It should be enough so that king can perform welfare as well as protective functions. It should be sufficient to meet the emergencies like wars or natural calamities.

Separate officials are appointed for accounting and auditing. Kautilya cautioned the king that anything acquired for the treasury should be legally obtained. He further advised against excessive taxation as it will increase the hatred against the system that can give rise to rebellion.

State/People refers to common and ordinary citizens. As per Kautilya force can be used against people for a short duration but eventually, the king will have to gain popular goodwill by ensuring the common good.

Army – Attention was given to having elaborate and efficient armed forces. There was even a department exclusively for logistics that provided food etc to the people on the battlefront.

Fort –  It symbolizes internal security from external threats. Kautilya has given a detailed view of various types of forts.

Allies – Kautilya prescribes specific qualities to be looked at in a friend. He prefers neither a strong ally who might entertain ambitions against the state nor a weak ally in case of which allies’ wars will have to be fought by the state.

Geopolitics is about controlling territory through military means. Kautilya has given strategies to acquire territories.

Mandalya theory is based on the assumption that a neighbour is a natural enemy. Hence neighbour’s neighbour that is the enemy’s friend is to be befriended. It appears not to be true in this globalized world of interdependence. It is nevertheless true that neighbours tend to have stressful relationships with each other.

Mandal siddhanth tells us about the strategies a leader has to adopt to realize the objectives. The concept needs to be understood in Kautilya’s context where his state was surrounded by aggressive neighbours.

Depending upon the calculation of his own power and those of others, the king can pursue the following options.

Sandhi – if you are weak, then go for a treaty or peace.

Vigraha – if you are powerful, then break the sandhi.

Asana – stationing troops near the border.

Sanshrya – join hands with those having similar objectives.

Dvaidhbhava – dual approach ( peace with one and war with the other).

Chanakya has dealt with the question of corruption in a detailed manner. According to him, corruption is using public office for private needs.

In the words of Kautilya, if there is honey on the tongue, it is not possible that a person will not taste it. It means that public officials hold so many public funds that it is impracticable to believe that there will be no corruption.

Kautilya has listed ways in which public officials can manipulate public money. For example – releasing money but not entering into the books, releasing earlier and entering later or vice versa, mentioning a greater amount than the actual or vice versa, etc.

Kautilya talks about corruption among judges who may punish the innocents and set the criminal free.

Corruption directly impacts the well-being of the people, and it can create disaffection towards the king. This disaffection can be manipulated by the enemies.

Kautilya’s measures to deal with corruption – right-sizing the bureaucracy, transfer at regular intervals before the person comes to know all the loopholes of the system, king to give rewards and protection to the whistleblowers, fines and punishments should include public humiliation of corrupt officials, reward honest officials, right to compensation to those who have been affected by corruption, punish all persons in a chain ( one who pays, one who receives and one who controls ).

Scholars have found similarities between Kautilya and Machiavelli. Some call Kautilya as Indian Machiavelli. The two thinkers differ in time and space. They do have some differences as they belong to a different culture, but they have remarkable similarities.

Both have a similar concern about their motherland. Both belong to the school of realism. Both support the use of force and violence. In ancient times, politics was known as “Dandaneeti”.

Even Kautilya allowed the use of religion for the sake of national interest. Both support imperialist foreign policy. For Machiavelli, ends justifies the means, and Kautilya recommends “Sam dam dand bhed” (4 fold policies).

Kautilya and Machiavelli differ in one context and that is on dharma. Machiavelli’s prince is above religion. He sets the morality, whereas the king in Kautilya is not above dharma.

Kautilya’s system is based on the strong emperor, meaning there is a greater focus on individual brilliance rather than institutional strengths. His empire was built up more on the ability of force supported by an elaborate espionage system rather than on people’s trust and confidence which is the ultimate way to ensure the survival of any kind of state.