Popular
What is China’s ‘Wolf Warrior’ Diplomacy?
Latest on Tunisia and Arab Spring
What are VPNs, and why are they in the news always?
Few terms coming up in focus to understand the troubled global economy
U.S. Fed interest rate hike and its impact on India
Dispute between Armenia and Azerbaijan – The past and the present
Why are special drawing rights (SDR) in the news always?
The world faces a growing stagflationary storm
What is and Why De-Dollarisation?
International Energy Agency (IEA)
Personalities 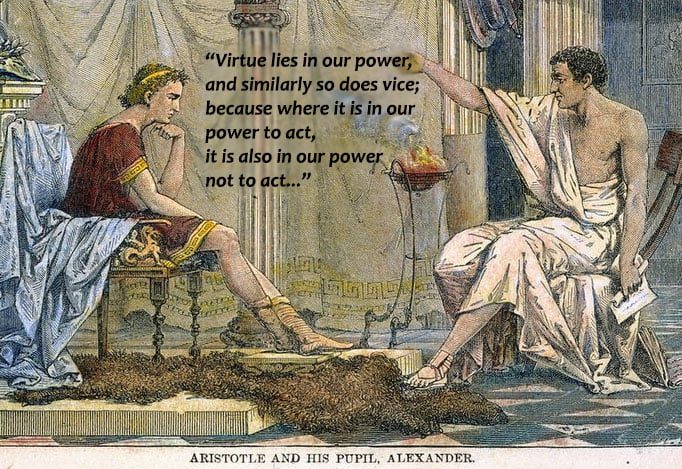 Anybody can become angry-that is easy;

but to be angry with the right person, and

to the right degree, and

at the right time, and

for the right purpose, and

in the right way-

that is not within everybody’s power, and

Aristotle (384–322 BC) was the disciple of Plato. But, if Plato looks for the best, Aristotle suggests that we should not sacrifice good for the sake of the best as best is unachievable. Aristotle gives the best practicable State.

Plato is radical and looks for far-reaching changes, whereas Aristotle is conservative. He prefers only gradual changes.

Aristotle believed in the school of Teleology (School of Destiny). Aristotle also believes in reason.

“Man is by nature a political animal“

But Aristotle proves that State is natural and necessary for virtuous life by stating that “man is by nature a political animal”. In other words, nature has made man in such a way, living in a state is required.

To prove that the State is natural, Aristotle tries to establish the origin of the State in the needs of man. Thus, he establishes that it is natural for a human being to be a member of a political community.

Hence, he also suggests that “one who can live without State is either beast or God, but he cannot be a man”.

According to him, one requires superhuman qualities to be able to live without the State. Chronologically, man has made the State, logically State makes the man.

Aristotle has established the State as the highest of all associations. No other association deserves the same level of respect that the State deserves. Other associations are not sufficient to fulfill all requirements of man. The life of man cannot be virtuous without the State.

Whether man by his nature a political animal and the State is an agency of excellence remains a matter of debate among political philosophers.

For classical liberals who believe freedom is important and the State curbs freedom, say that the state is “a necessary evil” whereas anarchists believe that a state is “unnecessary evil”.

Citizens, the able greek men, are, on the other hand, possess the mental capacity and thus are useful for carrying out the affairs of the city.

Slavery is important for the slave himself as he lives in the company of citizen and can one day develop qualities of the citizen. Aristotle’s conception of slaves is functionalist, and he asks the citizens to free the slaves if he develops the quality of a freeman.

Aristotle’s theory of slavery becomes the basis for justification for theories like benevolent despotism or white man’s burden.

Critical evaluation – In the age of democracy and human rights, institutions like slavery cannot be justified even on the grounds of utility. Aristotle is criticized for his justification of slavery.

In this context, we can quote Immanuel Kant. According to him, each man is an end in itself. No one ought to be treated as means to an end. Meaning that we should not treat other people as a utility against principles of ethics; not to treat others as objects.

” men cannot know each other till they have ‘eaten salt together’ “

Aristotle talks about citizenship in terms of duty rather than rights. The major duty of citizens is to participate in the affairs of the city-state. Aristotle excludes women, old men, children, and slaves from the duty.

Aristotle gives a very narrow theory of citizenship that cannot be accepted in the present age of democracy and human rights. However, Aristotle’s theory is appreciated for its emphasis on the necessity of participation in civic affairs.

“Happiness depends upon ourselves“

Aristotle criticizes Plato’s theory of communism of property. Aristotle has justified the institution of private property but he understands certain evils, as it results in social inequalities, therefore suggests reforms.

According to him, the property earned by a person by the use of his labour is legitimate. Property if earned by exploiting someone’s circumstances is not legitimate. He has criticized the institution of money lending.

Aristotle analyses three systems of the property. The first system is that of common ownership and common use. Aristotle rejects this by stating that everyone’s property is no one’s responsibility. Such systems are never productive and also not good for the upkeep of the property. e.g. public park versus private garden.

The second system is that of common ownership but individual use. This is an impractical system, and if it is in practice, it will be very exploitative.

The third system is called the individual ownership and common use system. Aristotle calls it the best system as it is more productive. In it, there is better upkeep of the property. There is a source of motivation also. Aristotle suggests that a person should contribute to the well being of society.

It was one of the earliest manifestations of the idea of progressive taxation and welfare state. We see similarities in Aristotle’s theory of property and Gandhi’s theory of trusteeship.

Aristotle’s theory of justice is known as proportionate justice. The theory of justice is closely linked to the idea of equality. Aristotle has given two principles. The first principle suggests that states should treat equals equally. The two persons having equal merit and making equal contributions to society should be treated equally.

In case they are not treated equally, the person who feels that the State has discriminated against him may contribute to the revolt against the State.

The second principle suggests that it will be equally unjust if the State treats two persons with different abilities and contributions, equally. Aristotle is against absolute equality.

Aristotle propounds a meritocratic society. But in countries where historical injustices exist and an equal level playing field does not exist, Aristotle’s theory cannot be accepted.

Aristotle has written on various issues, but in his book “politics”, he has dealt with the theory of constitution in the most exhaustive manner. He was not comfortable with Plato’s ideal state, so he wanted to know what is the best practicable State.

To understand that, he studied 158 constitutions and finally gave his theory. In his theory, he discusses forms of government on the basis of the purpose of governance and the number of persons forming the ruling class. He has analyzed how one form of government changes to another form. He ultimately suggests that polity is the best practicable form of government.

We can see the application of the principle of “Golden mean”. Polity is the golden mean of oligarchy and democracy. Aristotle is following reasons against the rule of the rich (oligarchy) and rule of poors (democracy).

But both rich and poor will trust the middle class. Hence middle class that has average wealth is more disciplined and has a reason. This way, the polity is the best form of government.

We should not interpret Aristotle literally and criticize him for excluding the poor. We must understand the point Aristotle is trying to make. He is suggesting that extreme inequalities of income and wealth in any society are not conducive to stability. The State cannot leave large sections of society in the state of poverty. There is a need for upliftment for the poor. If more and more people are in the middle class, it will be better.

Aristotle had studied constitutions of his time and earlier times. He gave his theory. Aristotle favoured stability. He has given a detailed analysis of the causes of revolution and measures to prevent it. He has given general causes and regime specific causes. The most common cause behind revolutions is the feeling of inequality, real or imagined.

The general causes given by him are lack of discipline among public officials, high-headedness of the ruling class, state rewarding those whom people consider being unworthy, universal passion for power and privileges, too much influx of foreigners, state neglecting small changes, the rivalry between people of different classes, liking for change among people, and so change is inevitable.

He even gave solutions to manage the revolutions. He suggests that the State should cultivate the spirit of obedience to law and education among people. Also, the State should address corruption and moderate its use of power.

“The law is a reason, free from passion“

The above statement is in the context of Aristotle’s criticism of the institution of the philosopher’s king. Plato has given absolute powers to the philosopher-king as they are the embodiment of knowledge and sacrifice. For Plato, no law or ordinance is mightier than knowledge.

Aristotle disagrees with Plato and suggests that the rule of law is preferable over the rule of a person. For Aristotle, law and reason are the same, and the purpose of both is to guide man as to what is right and wrong.

Aristotle says that law is coming to us for ages that makes it time tested institution. Moreover, the law represents collective wisdom that is preferable over the wisdom of one person.

“The whole is more than the sum of its parts“

The State as the family of families

According to Aristotle, there is a difference in the authority of statesman and the authority of the father. A state is not a family but a family of families. The better way of making laws is when people representing different interests come together and enter into the process of deliberations. Laws of State represent diverse intent to achieve equilibrium in the society.

Aristotle belonged to Socratic tradition. He gave preference to the state over self-interest. He believes in natural inequality. Plato divides people into guardian and producer class and Aristotle into masters and slaves. He believes in reason and understands the evils of private property. Aristotle also considers education as the source of virtue.

Aristotle is pragmatic in approach and conservative too. He prefers the Rule of Law over the rule of a person. He was also a critic of Plato’s communism of property and family.

He is the originator of many ideas like conservatism and constitutionalism. His book “Politics” can be treated as the first textbook of political science.

“We are what we repeatedly do. Excellence, then, is not an act but a habit“