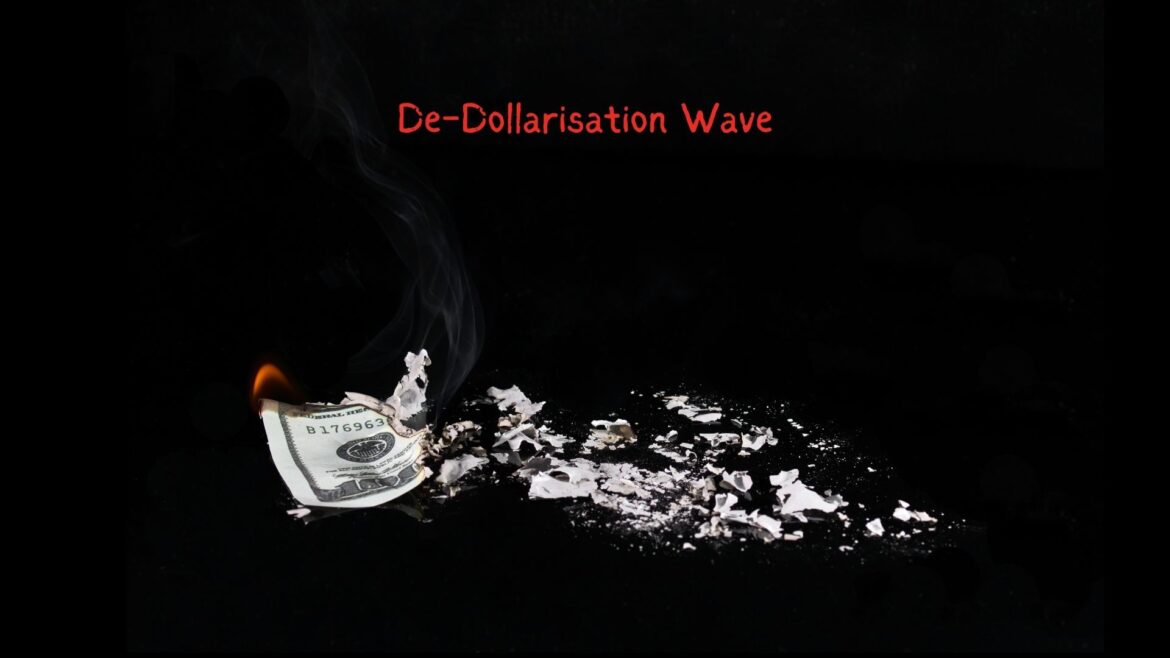 The “economic war” against Russia represents the new globalization that is emerging. As globalization changes, so are the formation of blocs and alliances on the international stage. There’s a chance that the times of moderation and passive neutrality are coming to an end. Even Switzerland, which remained neutral throughout both World Wars, has abandoned a centuries-old tradition of neutrality by criticizing Russia’s actions in Ukraine. Also, countries like Sweden and Finland have lately shown interest in joining Nato. Till now, they were neutral and remained outside of any military alliances.

The word itself tells much about what it actually means. The term “de-dollarisation” refers to the process of diminishing the dollar’s dominance in global markets. It is a process of substituting the U.S. dollar as the currency that is widely used for:

The U.S. dollar has long been the main currency in international trade. Oil, gold, and other commodities, for example, are quoted in dollars. Many nations keep their reserves in dollars in the form of Treasury Securities issued by the United States. De-dollarisation refers to a shift from this world order to one in which nations sell their U.S. Treasury bonds in order to hold reserves in other currencies or gold and seek to utilize their own currencies for dealings with trading partners.

What are the Causes of the Dollar’s Prominence?

After World War II, the U.S. dollar replaced the British pound as the world’s major reserve currency. The dollar established its strength predominantly in the period when countries agreed to peg their currencies to the dollar, and the dollar, in turn, was pegged to the price of gold. The dollar’s dominance means that gold, oil, and most other commodities are quoted in dollars. It has been the most sought-after currency by central banks to be kept as reserves while massive amounts of transactions, investments, and funding are made in dollars. Also, it gave the currency the stability that made it the perfect candidate as a second currency in several nations which had an unstable local currency.

In the early 1970s, the U.S. dollar solidified its position even further with an agreement with the oil-rich Saudi Arabia to conduct worldwide energy trade in dollars. As a result, other developed market currencies were unable to compete with the USD.

Currently, USD accounts for around 60% of the central bank’s foreign exchange reserves and 70% of global commerce. The psychological aspect of perceiving the USD as a “safe-haven” asset is that people still regard the currency as a relatively risk-free asset.

Today, China and Russia both play critical roles in the global economy. Both are facing economic sanctions from the U.S., and both are eyeing long-term strategies to reduce the prominence of the USD in global commerce. Due to this, for decades, Russia and China have been planning for a de-dollarisation, selling off their dollars and filling their vaults with gold and alternative reserve currencies. But why?

The dollar’s significant role in the global economy provides the U.S. with a disproportionate amount of influence over other economies. The U.S. has for long used the imposition of sanctions as a tool to achieve its foreign policy goals. Therefore, de-dollarisation is driven by the desire to insulate the Central Banks of the countries from geopolitical risks.

How does the U.S. wield this power? To be able to settle transactions in dollars, even between two parties located outside of the U.S., access to the U.S. financial system is required, and leveraging on this, U.S. governments have imposed sanctions on many countries, most notably China, Russia, and Iran. These sanctions have only served to spur these countries to come up with creative ways of reducing their dependence on the dollar.

The United States has the ability to impose economic penalties on practically any transactions paid in dollars. By instructing so-called correspondent banks that hold accounts at the Federal Reserve not to transact with, say, their Russian counterparts, the USA cuts off one of the main ways of obtaining the dollars necessary to participate in international trade.

The ongoing conflict in Ukraine and the subsequent economic sanctions and the exclusion from SWIFT (Society for Worldwide Interbank Financial Telecommunication) by the U.S. can trigger a faster de-dollarisation for other countries who want diplomatic and economic autonomy as they will be wary of using US-dominated global banking systems.

The U.S. dollar can see a steady fall in the current context as leading central banks may seek to diversify their reserves to other assets or currencies like the Euro, Renminbi, or gold.

What are the Efforts for De-Dollarisation?

If two countries trading with their local currencies is termed de-dollarisation, then many countries are recently adopting it. The leading geopolitical opponents of the U.S., Russia, and China have already started this process of de-dollarisation. Efforts are made for the possible introduction of a new Russia-China payment system, bypassing SWIFT.

Russia began its de-dollarization efforts in 2014 after sanctions were placed on it following the invasion of Crimea. In 2021, Russia’s proportion of dollar-denominated assets was around 16%. It also decreased its reliance on USD in bilateral trade by favoring national currencies.

Furthermore, the Trump administration’s sanctions on China would readily explain the Chinese government’s plans to establish a Central Bank Digital Currency, or CBDC, permitting cross-border payments, as well as its purchase of oil in Yuan. Meanwhile, China has developed CIPS, which is a way of avoiding using the western Swift system.

RMB trading centers have been constructed in Hong Kong, Singapore, and Europe by China. In 2016, the International Monetary Fund (IMF) added Yuan to its SDR (Special Drawing Rights) basket. However, the lack of full RMB convertibility will hamper China’s de-dollarisation ambition.

Even E.U. countries have joined up to establish a company that has allowed them to make non-USD transactions in order to make payments to Iran without breaking the U.S. sanctions imposed on the country.

In the past, India has had to work out alternate arrangements, including a barter agreement, with certain sanctioned countries. Recently, it has been reported that India and Russia are considering using the Yuan as a reference currency to facilitate oil trading. Like the Chinese renminbi, the Indian rupee is not yet fully convertible at the exchange markets.

India, like China and Russia, may have a digital currency in the near future, and some signs of this are already visible. India might also aim for a higher proportion of euros and gold in its foreign exchange reserves. Trade in national or digital currencies with Iran, EAEU, BRICS, and SCO countries may also become a reality in the near future. The growth of Asia as an economic powerhouse will raise the importance of other currencies.

Therefore, the de-dollarisation of bilateral trade is already underway, albeit slowly, among the Brics and several emerging markets. The de-dollarisation will get a big boost if Saudi Arabia decides to price some of its oil sales to China in Yuan instead of dollars. If that happens, India, Indonesia, Turkey, and a host of other emerging economies will be the next to knock on Saudi Arabia’s door and seek similar arrangements in their own currencies. However, the Biden administration has so far failed to connect with Saudi Arabia. Saudi Arabia remains annoyed with the United States’ lack of support in the Yemen civil war that started in 2014. Saudi Arabia also witnessed the U.S. exit of Afghanistan during the Biden administration and U.S.’s attempt to reignite a deal with Iran over its nuclear program.

But to be fair, a shift away from the dollar would not be without danger. Central banks’ sudden dumping of dollar assets will undermine the value of their total dollar-denominated holdings, posing a balance sheet risk.

Also, when the Federal Reserve, for example, chooses to raise interest rates, the dollar is likely to rise, so countries with dollar-denominated debts are at the mercy of U.S. monetary policy.

Apart from the Euro and gold, most other foreign currencies come with their own set of risks. For example, when the historically “neutral” Switzerland joins the European Union in imposing sanctions on Russia, the Swiss Franc ceases to be a viable asset as a hedge against economic penalties.

Moves towards de-dollarisation would also open up new opportunities for conducting bilateral trade and investment in local currencies. Of course, the transition to a multipolar currency system will be disorderly and unlikely to happen overnight, but it can be worth pursuing.

Having said all that, the big picture is that de-dollarization by Russia and China has had only a little impact on the U.S. dollar’s dominant position. The dollar is still utilized in approximately nine out of 10 foreign exchange transactions. It accounts for over three-fifths of all global central bank reserves and the great majority of global export invoicing. So while Russia’s latest move is undoubtedly part of a larger strategy that has had some success, we are still far from reaching a tipping point.

With price inflation now raging, the risk of resource wars is rising. Own physical things instead of cash – that’s the high-level advice Elon Musk has for those seeking advice on where to store their wealth when inflation is running rampant.

The other way forward would be to diversify the currency market when no one currency claims hegemony. Investors concerned about geopolitical and inflation risk would be wise to de-dollarize their own portfolios. Replacing paper assets with precious physical metals in prudent allocations can help insulate wealth from a variety of threats that now exist and those we can’t yet see. Are we witnessing the birth of a new world (monetary) order centered around commodity-based currencies in the East, and will it weaken the Eurodollar system? Only time will tell.